You can use several operation codes with partly replicated functional for controlling Z-Audio:

Audio Control commands enable fully-featured play back control. Besides that they allow you to display names of playlists and tracks, numbers of tracks in the playlist, numbers of playlists. With their help you can form lists of folders and tracks on your SD card or FTP server. In iRidium you can navigate among folders of your SD card and FTP server with the help of Lists.

Not all versions of Z-Audio firmware support work with Lists. Old models of media players will not send lists of folders and tracks to iRidium projects for displaying them in the interfaces.

"Commands and requests" are used for setting up value or for requesting Z-Audio properties. "Properties for reading" receive and display the Z-Audio values which you cannot affect. When forming "commands" or "properties for reading", Source of data (SD card, FTP, Radio, ...) and Zone are particularly important. Not all sources give the same set of properties and some commands work with zones only, not with sources.

When scanning the HDL-BUS Pro network and adding the Z-Audio audio server manually from the iRidium database, the required list of command for Z-Audio is formed automatically. You just need to assign commands to graphic items.

Commands are divided into groups depending on the source to which they are directed. The commands for which only Zone is indicated work for all sources (see the list of commands). 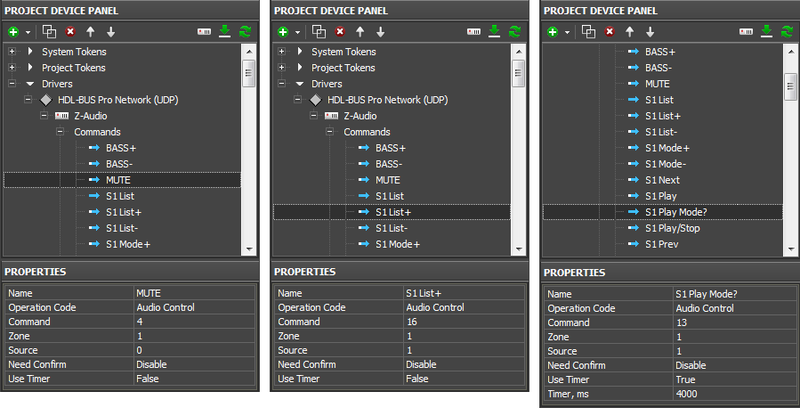 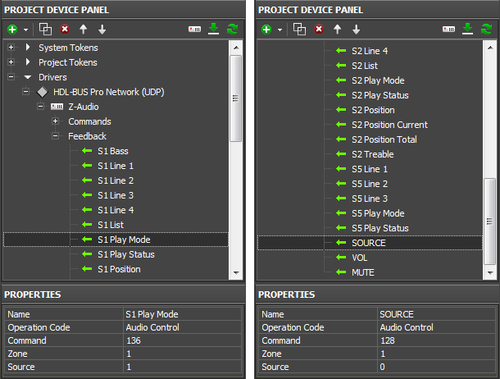 Adding Z-Audio Control in Your Projects

You can extend the list of commands for Z-Audio if you need to work with sources which are not included in the preconfigured set (SD Card, FTP Server, Radio). When all commands are ready, you can proceed with assigning them to project graphic items. In the ready project for Z-Audio command and channel assigning is already made.

There are two variants of adding Z-Audio control to your project:

#1. Add the ready Z-Audio control in your project

You need to set up only the navigation to Z-Audio control and back to the project. The remote control created in this way does not need additional setting up. You just need to indicate SubnetID/DeviceID of the Z-Audio module.

#2. Create your own Z-Audio remote and assign ready commands to it

1.
Any command besides LIST (ID: 160) and VOLUME (ID: 3) is performed when pressing a standard Button. You need to indicate the Send Number tag when dragging the command to the button. After selecting the sending event (Press or Release) the assigning of the command is completed.

2.
The command VOLUME (ID: 3) is used for controlling the volume, sending values in the range from 0 to 100. You can control the volume similarly to the HDL-BUS Pro dimmer, using Button, Level, Up/Down Button.

3.
The command LIST (ID: 160) is used for displaying lists of folders and tracks of the SD card or FTP server. The command enables convenient navigation in the catalogues of the audio content source. You can assign the LIST command only to the List type item (dynamic list). Assigning of the command and feedback channel is performed with the help of special assigning tags. For the Select event of the List item set up:

4.
Feedback channels display the status of the source or zone on project graphic items. Different channels send different types of data (strings or numbers) and that should be considered when assigning them to graphic items.

Audio Control commands do not allow you to select a particular play-list, track or playing mode. You can use TTPlayer commands for controlling Z-Audio play-lists.

TTPlayer commands are NOT used for updating lists (it is possible only using Audio Control). But you can use them for controlling lists. 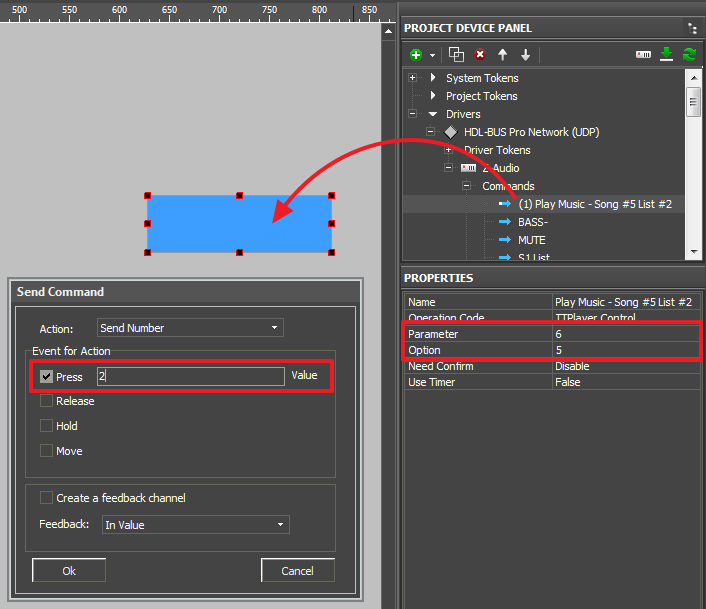