Global Cache (GC-100-06, GC-100-12, iTach IP2IR, iTach WF2IR) is a family of converters for controlling audio-video equipment. They receive commands via TCP/IP and send them to the controlled equipment as IR signals or via the СОМ-port. Converters can send commands in the local network or via the Internet.

Global Cache converters are recommended for use with iRidium: they have the base of IR commands, preset drivers and the possibility of learning IR commands from remote controls.

Principles of Controlling Equipment via IR

You can use "Global Cache" modules for controlling your audio-video and other equipment via IR in iRidium. The scheme of communication between iRidium and controlled equipment looks as follows:


Feedback from equipment: none via the IR channel

Required license: Device License Pro for AV & Custom Systems (see Licensing). It works with any Global Cache converter. It enables use of any scripts in your projects.

A Global Cache (GC) converter should be connected to the local network and set up to enable iRidium to connect to it. Information on setting up GC:

Setting up of Global Cache Modules in iRidium

Select the Global Cache driver in the DEVICE BASE list of iRidium GUI Editor and drag it into the PROJECT DEVICE PANEL window: 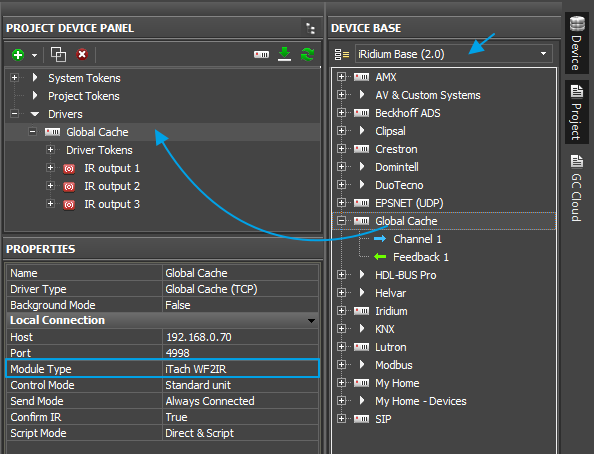 Properties of connection to Global Cache:

To connect to Global Cache via the Internet:

1. Indicate the public IP-address (or the domain name) of your Internet router in the Host field
3. Set up Port Forwarding on your router to enable remote control of your equipment .

Setting up IR outputs of Global Cache Modules in iRidium

3.5mm outputs of Global Cache converters can operate in one of the following modes:

To send an IR command from the Global Cache output, set it in the IR mode. 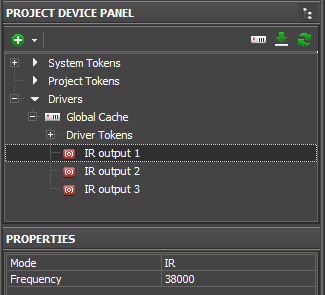 Driver variables are available for reading only. They help to monitor connection to equipment. 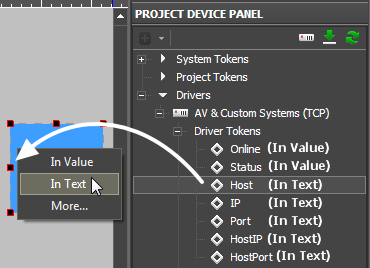 The set up Global Cache outputs have to be filled in with IR commands. They can be received in several ways: 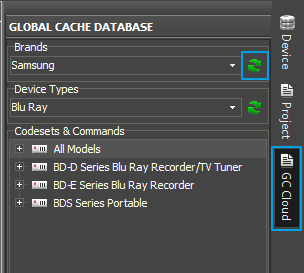 Drag the folder with commands to the Global Cache IR output in your project.
The commands are preset, you don’t need to edit them: 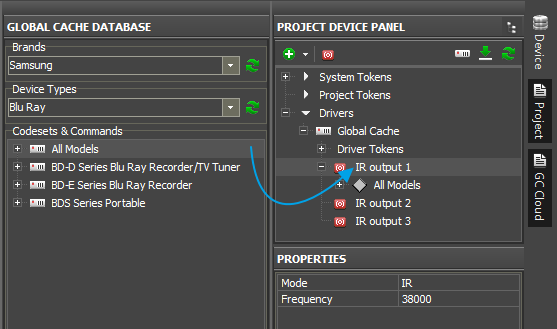 Commands and folders can be moved to IR modules of GC modules in yout project by dragging.

GC-IRL IR Learner is a reader of IR commands for Global Cache.

It is available in two ways:

The reader allows you to create the list of IR commands which can be used in all iRidium projects for Global Cache.

Learning of IR commands is possible in two ways:

The fast way of learning IR commands – inside the opened iRidium project:

1. Place the cursor on the Global Cache IR output
2. Click "(+) > add a folder" of IR commands (for convenience)
3. Click "(+) > add a command" several times to match the number of buttons of the remote control you are reading
4. Name all added commands according to the use of the buttons
5. Select the first command in the folder and click "Learning..."

6. Select the type of the learning device (Learner Type)

8.During learning click the button on the IR remote control which corresponds to the current name in the window. The remote control has to be directed to the device being read from the minimum distance: 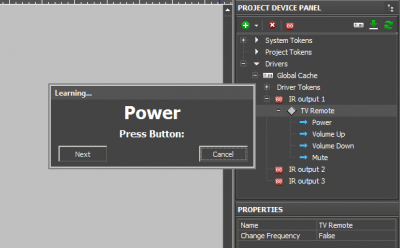 * If the command name in the window doesn’t change when you click the button on the IR remote control – the learning failed! To find the reason of the problem, use the program iLearn from Global Cache. It will show error at connection. Check the connection with the converter.

The database of IR commands is located in DEVICE BASE as the standard iRidium database, but it can be formed manually. From the database you can easily add the IR device on the output of the Global Cache module (it can also be transferred from another project using File > Import).

You can create an IR device only in a custom database as the standard database is not available for editing:

Therer is a minimal number of settings for a new IR device as it is a folder of commands for Global Cache.

In the Commands & Feedbacks tab form the list of IR commands which will be filled with data at start of learning (Learn...) through GC-IRL IR Learner:

It is not recommended to use special symbols in commands names.

If the learning is successful, the command names will change automatically.

* Learnt IR commands are written in the database in bold.

* If the command name in the window doesn’t change when you click the button on the IR remote control – the learning failed! To find the reason of the problem, use the program iLearn from Global Cache. It will show error at connection. Check the connection with the converter.

Close the database editor after saving the changes.

To add the received IR device in your iRidium project: 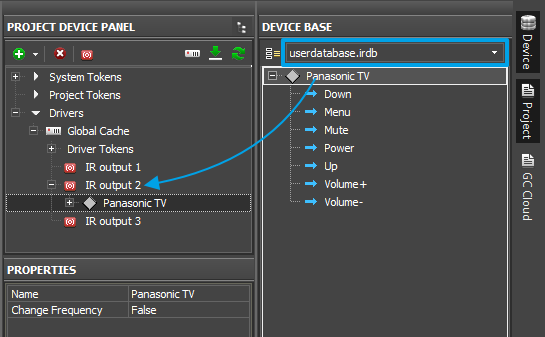 Creating Databases of IR Commands on the Basis of Equipment Documentation

Documentation to AV equipment contains IR commands for the equipment in the HEX (CCF) format. So the commands should be converted to the Global Cache format and only then add them in your database of IR commands.

iConvert – the Global Cache software which enables conversion of IR commands from HEX (CCF) to Global Cache formats and back.

Convert the command to the Global Cache format with the help of iConvert: 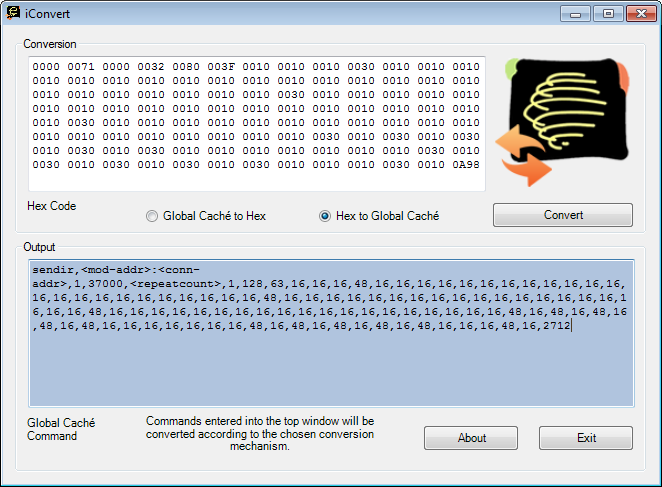 You receive the command in the Global Cache format in the Output window but it is not ready for using yet.

The red color indicates the command part which will NOT be used .
This part is an empty command header which iRidium forms automatically.

The part which has to be saved:

It is a command body. It contains the specific action and it is sent to AV equipment.

Convert and save all IR commands of the TV in a similar way. Then they can be saved in the iRidium database.

Add the commands in your database of IR commands. 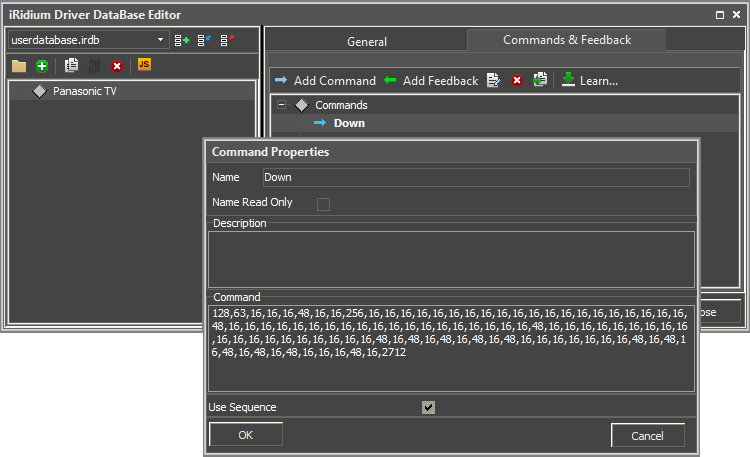 The frequency of command sending is indicated in the properties of the Global Cache IR output, when commands are added in the project.

Save the changes in the database and add the created IR device on any Global Cache IR output in your iRidium project.

IR command settings differ depending on the way of receiving IR commands (from the database or manually): 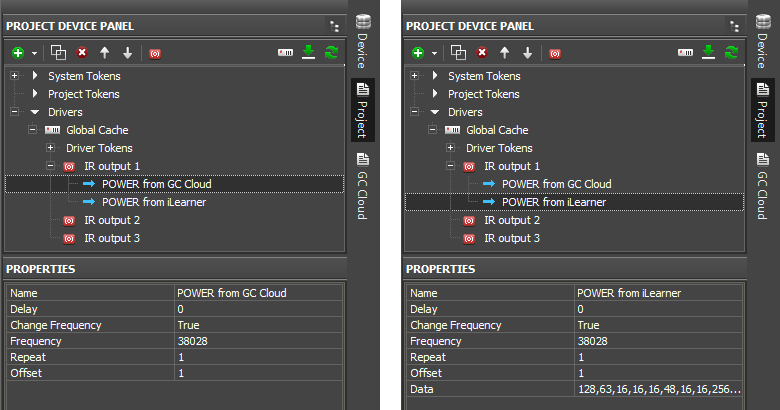 IR commands are not initially linked to visualization interfaces by default. To send a command it has to be assigned to a button in your iRidium project.

Events at which commands assigned to Buttons can be sent:

Events at which commands can be sent from scripts (see iRidium Script API):

Drag an IR command to the graphic item and select the event of command sending in the Send Command dialog window: 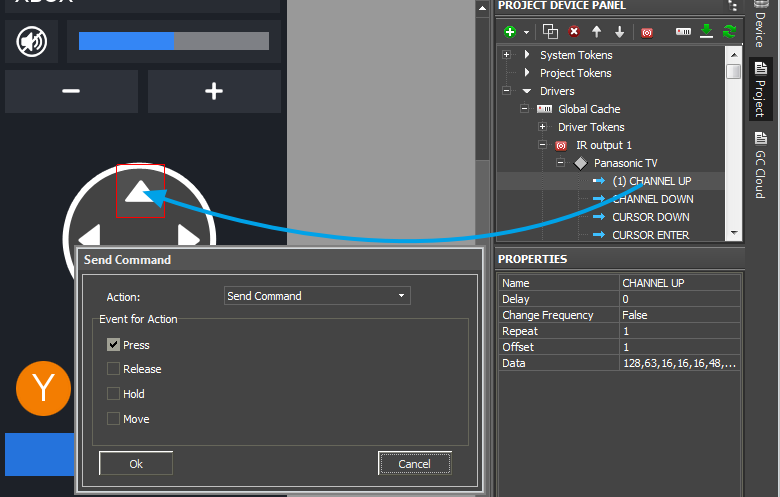 You can see added commands in Object Properties > Programming. Commands can be dragged from one event to another.

You can assign several several commands on one button:

To assign several commands drag them one by one on one button and assign them to one of the events for sending (Press or Release):

The macros editor for the Press (or Release) events will allow you to move the IR commands and separate them with delays (Delay), additional commands.

Hold – the event of "holding the item". It enables sending of one or several commands in a cycle all the time you hold the item (like the Volume + button on the IR remote control).

Activate the Press event for the item so it could react not only on holding but on pressing as well:

The Hold event settings are in Object Properties > General:

The commands written in the Hold event will be sent in a cycle until the button is held with the interval indicated in Repeat Time.

Control from Levels, Trigger Buttons and other items

When working via IR it is not possible to set up sending of commands from Levels. It is due to the fact that an IR command contains a target action and you cannot change it without changing a part of the IR command.

In the case of IR commands the control from Level is not possible. Each Level value corresponds to a separate IR command and the majority of IR remote controls do not offer setting up of a particular volume value (they have only + and -).

In order to send two IR commands in turns or to create a complex sequence of command sending you need to use iRidium Script. It is a built-in programming language which enables setting up of required relations. See iRidium Script API. 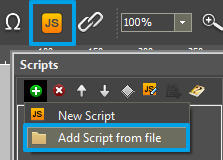