<< back (AV & Custom Systems: Working with Equipment via HTTP)

This article presents control of AV equipment or other systems via HTTP through the example of the DuneHD device.

Principles of Controlling Equipment via HTTP

To control Smart Home systems via HTTP commands (Ethernet or Wi-Fi) iRidium uses the freely customizable "AV & Custom Systems" (HTTP) which enables iRidium to send commands via HTTP (the commands are sent in the GET and POST formats). Thus the scheme of communication between an iRidium control panel and controlled equipment looks as follows:

Commands can be sent to HTTP devices in the ASCII format. When sending commands use special iRidium syntax to define the data format.

To store HTTP controlled devices with commands it is required to create their data base in iRidium GUI Editor. It will enable you to use the devices in any iRidium project.

DB Editor is used for adding devices controlled via TCP and their commands to iRidium base. New devices can be added only to custom data bases as standard bases contain ready preconfigured modules of devices which cannot be edited (you can only take modules from the ready bases).

Tools for creating new devices in iRidium data base are available in the right-click menu. The type of the created device - HTTP (HTTP Device) – defines its characteristics. For HTTP devices you can indicate information about the manufacturer, type of the controlled equipment, comments and commands. 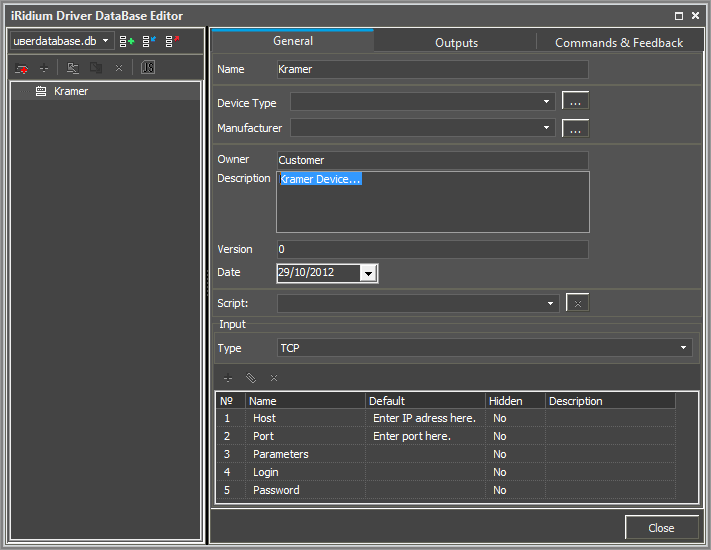 HTTP devices have the following properties for connection:

These optional properties are used seldom and if you are not going to use them it is recommended to hide them: click two times on each property to open the window for settings and select Hidden. 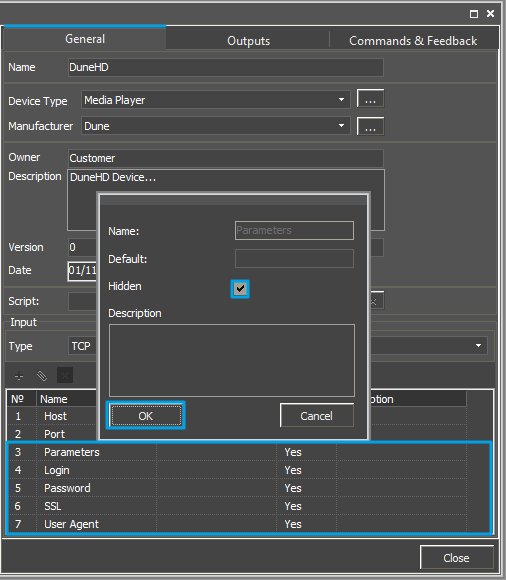 To add the command in the list of the created device go to the Commands & Feedback tab and use tools of the Editor base: 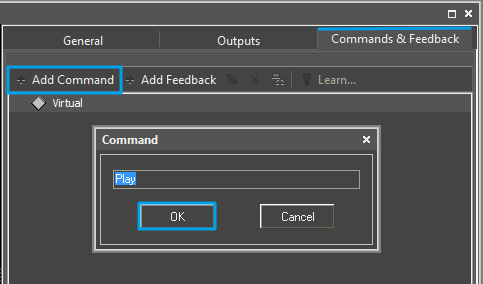 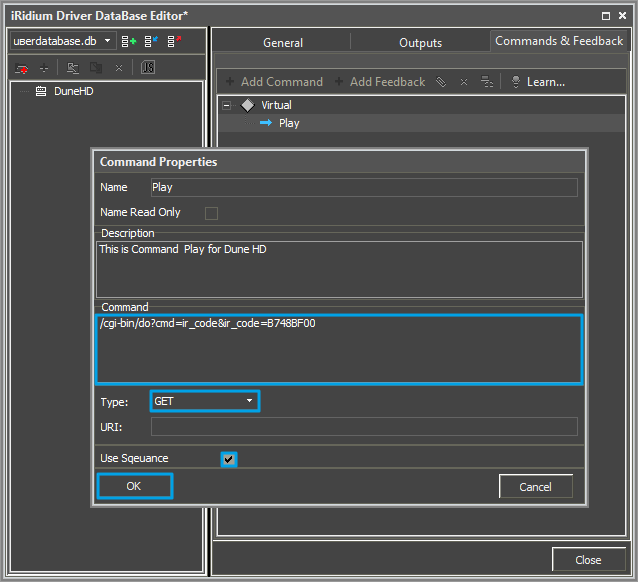 At that the command can be checked through the browser window, as a GET-request it looks as follows: 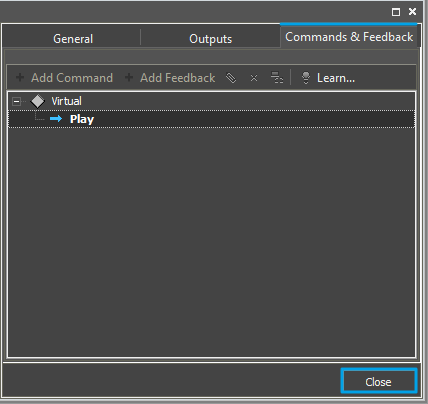 Commands for sending via the HTTP protocol cannot be added to DB Editor without checking them for compliance with the syntax accepted in iRidium. It allows you to identify the command data format and form the command correctly so it could be read by the controlled equipment.

The syntax of data sending via HTTP (GET and POST) defines the rules for sending data in the ASCII format.

When working with the AV & Custom Systems driver via HTTP GET requests are formed with the following view:

To form a GET request in iRidium indicate the body of the GET request with the first slash in the Data window of the data sending channel. For example:

The string in the Data window looks as follows: 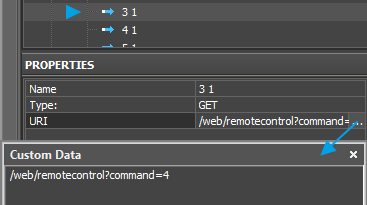 A POST request for sending via the AV & Custom Systems (НТТР) driver should be divided in 2 parts: URI (head) и Data (body).

The head of the request (URI) is the part of the hyper link which defines the directory the request is addressed for. It starts with the back slash and can contain any kind of data. The head is in the upper part of the POST request.

Further there is system information which should not be duplicated in iRidium.

The request body (Data) is separated from it. The separation is made by double combination of two symbols – the symbol of the string end and the symbol of carriage shift: 0D,0A,0D,0A. In the editor it will look as an empty string between request strings. There can be any data in the request head and body. The request body should be written in 'single quotes' when you add it in the Data field! 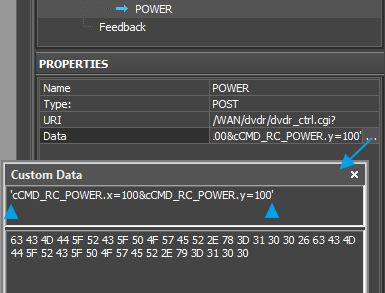 Create a new project. New projects can be created with the help of the button on Tool Box or through the menu File > New Project.

Select the userdatabase.db data base in the Device Base panel and add the DuneHD device you have in Project Device Panel of your project using the Drag&Drop method.

To connect iRidium to DuneHD, indicate the local IP-address in general settings of the device in the PROPERTIES window of the Project Device Panel: 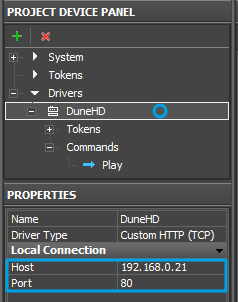 You can learn the external (public) IP-address of your router with the help of external resources, for example [1]

Select the Draw Item tool and create a new item. 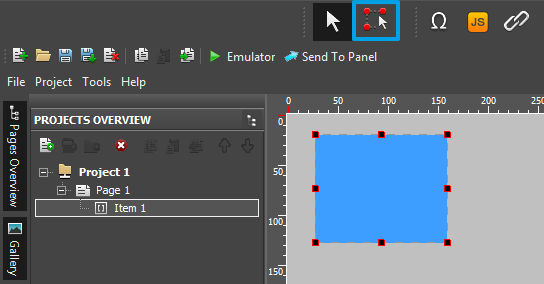 Open commands of the DuneHD device and drag the Play command on the item. Select send command in the appeared window. 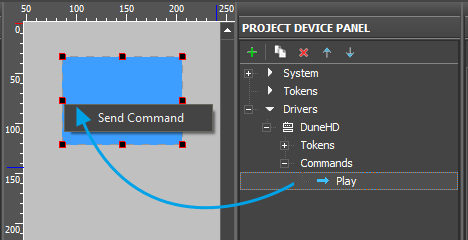 In the Send Command dialog window select the type of the event which will activate command sending to the device.

The Press event is indicated by default as the most commonly used. 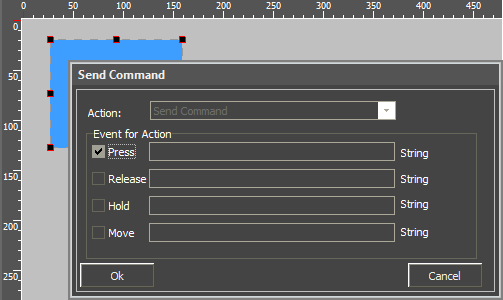 The commands added on the item can be seen in the Programming tab of the Object Properties panel. 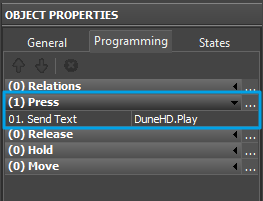 Launch Emulator to check how the command works.

<< back (AV & Custom Systems: Working with Equipment via HTTP)